TAXI TO THE TRAILER PARK 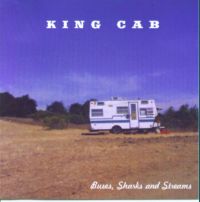 King Cab’s strength is its ability to have fun with country without self-parody.

The 14-foot trailer, parked alone, unleveled and baking in the sun, is an apt metaphor for the band’s debut CD, Buses, Sharks and Streams.   “Rock Lawn,” which jump-starts the CD, is a case in point.  Why would anyone want to have a lawn when rocks are so much easier to maintain?  D’oh!  Other trailer park lullabies include “Beer Can Chicken,” “Queen of My Trailer Park,” “Drinkin’ & Cheatin’,” and “San Felipe,” a tune about packing seven people into a Mexican motel room and calling it a vacation.

The single surely has to be “Evel,” a homage to the late motorcycle daredevil Evel Knievel who “Wouldn’t give a damn what you think.”   The song is as rock & roll as the daredevil himself who could break half the bones in his body jumping a fountain at a Vegas hotel, or ride a rocket into the Snake River.

King Cab combines honky-tonk sentiments, songs about the simple pleasures and catchy guitar licks.  They are the Ramones of Bay Area country.