THE FANCY DAN BAND LIVES UP TO ITS CLOTHES 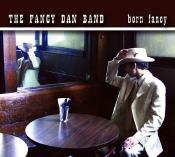 Bands with concepts risk that their idea will not stand up to time.  It was fame that freed the Beatles from their pudding bowl haircuts, and even Kiss ditched their makeup for awhile.

Fancy Dan’s dapper threads work because they aren’t a gimmick; they’re who he really is. He may be lookin’ good but he’s no stuffed shirt like the Fancy Dan stereotype who would do in Spiderman. The Fancy Dan Band’s leader is as amiable as a Midwestern preacher’s son and his band has the chops to back the threads.  It’s all explained in the self-effacing humor of “Wake Up Fancy,” the lead track on Born Fancy, the band’s debut CD.

Listen to any one or two songs on the CD and they’ll stand up well, but a funny thing happened on their way to the pressing plant.  The live show features some good kick from Michael Loebs’ lead guitar, the rhythm section punches it out, and Fancy Dan is up front and on it with his voice and rhythm guitar.  But Nashville, where the songs were recorded, ran all these assets through the Tennessee homogenator, and though they didn’t make the band sound country-politan, they did take away just enough edge to remind West Coast bands that they don’t need to go to Nashville to accomplish something that a couple of hundred California studios can do better.  Luckily, Californians can see this band live and still pick up a copy of the CD as a worthy souvenir, which, as we might expect, comes in a package as spiffy as its muse’s.