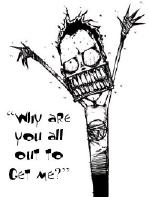 The last HWS issue’s story about pointless divisiveness in the Bay Area’s zydeco and roots music communities drew some interesting responses.  The better news is that zydeco’s battling bookers have decided against going head-to-head on Fridays in Alameda.  They’ve still gone their separate ways, but have decided to run their own shows every other week, without each others company, at the Eagle’s Hall in Alameda.  The good news is that this compromise will keep the audience intact and save pitting bands against one another.  The bad news is that the bitterness, which was accumulating long before the split, remains.  Could this compromise be a step toward reconciliation? Nutty Buddy, a licensed counselor (MFCC), emailed to point out the role of alcohol in the rare but troublesome rockabilly rumbles, and then went on to sympathize with clinical depression’s role in divisive behavior.  Referring to the “rock stars” who poison their own wells, Buddy wrote that, “Depression causes those who have it to act against their interests to avoid meeting the unreasonable standards they set for themselves.  The low self-esteem that accompanies [untreated depression] makes it necessary [for them to portray themselves] as perpetual victims and to bring their environments down to their level…  They are not mean-spirited, they are ill… [and] because [depression] is very good at protecting itself, they shy away from treatment, which makes their lives worse.”

Music actually attracts people with untreated depression according to The Cochrane Collaboration, an international organization that evaluated five research reports on music and depression.  Four of these studies connected music with mild, temporary depression relief.  “Music therapy techniques can involve making music, listening to music, writing songs, and talking about lyrics,” wrote Nancy Schimelpfening, commenting on these studies in her About.com depression blog. If music can lift the spirits of the depressed, imagine what it does for those with relative peace of mind.  Apparently acting like a rock star isn’t a behavior, it’s a syndrome.  More.