CITY OF SF’S NARROW VIEW OF MUSIC AS ART

The City of San Francisco’s arts budget is funded by millions from a special hotel tax, but those who run San Francisco Grants for the Arts (SFGFTA) are making sure that not one dime of it gets to hillbillies, rockers, punks, rappers, sonic outlaws, struggling clubs or, heaven forbid, music’s cutting edge.  Sadly, the SFGFTA web page that lists its 2008-’09 music grants displays a clear bias toward classical music, which raises the question of whether The City funds music as art or simply promotes musical elitism to the tune of $3.5 million.  By comparison, SFGFTA does seem to spread the wealth around for the other arts.  They granted the Samoan Flag Day parade $11,100, for example, but when it comes to music grants, from the American Bach Soloists to Volti, the agency funds classical music and not much else. 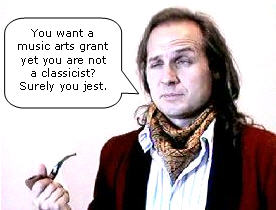 Considering the quantity of music-related endeavors in SF, SFGFTA is putting great sums on tax dollars into a narrow group of organizations that artlessly repeat the same-old, same-old year-after-year.  Imagine dividing $1.7 million among 500 songwriters, composers, mixmasters, small stages and nonprofits.  $3400 in each of those 500 hands would make San Francisco the creative music capital of the world, but that’s not the way SFGFTA thinks.

Their list of grant recipients reads like a who’s who of classical music snobbery with chamber orchestras aplenty, mid-summer Mozart (like the world really needs another one of those), and choral groups up the proverbial wazoo.  90% of the grantees are classicists and the rest are ever-so-PC ethnic and G/L/B/T groups of which the majority of them are both PC and classicist.  A grant hopeful who walked into SFGFTA with a Telecaster, twin turntables or a banjo could expect little more than a lash or two from Michael Tilson Thomas’ baton.

A Citizen’s Advisory Committee (CAC) is responsible for grant decision making, but they are merely acting on the will of those who appointed them.  The key to this unfortunate situation lies in the control of the San Francisco Arts Commission, which is over-populated with social and political hobnobbers.  It is their members’ tastes that ultimately determine what deserves a music grant and what does not.  Hoi polloi pack SF’s Art Commission, place their proxies in the CAC, and group-think their social agendas into art.  Thus it becomes more important to spend $1,800,000 to assure opening night galas at the opera and symphony than to put $3500 into the hands of someone who might create something more than a musical retread.