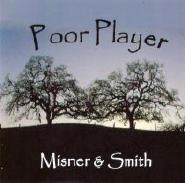 Misner & Smith make a strong case for folk Americana without baggage and for music with intricate simplicity and lyrical dignity.  This duo is a Bay Area treasure that needs to be shared.

The uninitiated might want to start their journey at MySpace by listening to “Greyhound Days,” the musings of a bus-riding philosopher that will leave the best of songwriters wishing they could write ’em like this.  “Though I ain’t religious his message seems clear/’Each eye that we meet, son, is only a mirror.”

Those familiar with the Bay Area’s Pete Bernhard of the Devil Makes Three or “shitkicker poet” A. J. Roach will find kindred spirits in Sam Misner and Megan Smith.  Like Bernhard and A.J., Misner & Smith have a touch for taking simple ideas, wringing the clichés out of them and infusing them with unexpected meaning, metaphor and imagery.

“Poor Player,” the title track, leverages their main occupations as stage actors.  In this song an actor views the world as an actual stage yet with himself as but a poor player waiting in the wings.

On “Length of a Song,” a royal court takes the place of the stage and a troubadour replaces the poor thespian.  Only this time, the outside world, symbolized by the court from kings to jesters, judges the troubadour as someone “Who’s here and he’s gone for the length of a song,” a comment on the brevity of life and the scarcity of lasting impact from our existences.

Life in the moment is at the heart of love in “Wandering Fool.”  And is it any wonder the duo took a wandering fool’s approach to recording their CD live in the studio?  Could these wandering thespian/troubadours have done it any other way?  Sometimes one’s life just has to mirror one’s art.

“Compose” calls up the image of a writer, who keeps herself as withdrawn from the world as her works which she keeps sewn into the lining of her coat.  She only experiences life through her imagination and her pen.  “Polly” is an answer song from the woman who was done in by the man who’d promised to marry her in the centuries-old ballad “Pretty Polly.” This is the tale from her post-mortem point of view with no comfort in her ending.

Find M&S playing the Bay Area on April 10, 22 and 30th.  Get calendar details and hear their songs at www.MySpace.com/MisnerAndSmith. They’ll make it easy to become a fan, and they’d surely have even more of a public if they didn’t spend their summers on the stage and much of their winters tucked away in Petaluma.