ROYAL DEUCES HAVE THEIR BABY 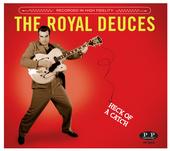 It’s been ten years since a 19-year-old Mitch Polzak tip-toed around the “21 and over” signs at the bars where his Royal Deuces (v1.0) were playing.  V1.0 was mainly about self-discovery and figuring out who would play drums from one gig to the next.  V2.0 grew from a trio into a quartet, releasing their first CD and breaking big at Viva Las Vegas in ’04.  Less became more in v3.0 as they scaled back to a trio with Mike Walz (Stillmen) on bass, and Ricky Quisol (Ricky Q and the Infinite Configurations) on drums.  Now v3.0 has its first child, a new CD named Heck of a Catch.

The CD gets off the line with three rockabilly boppers: “Heck of a Catch,” “Love Is Never Easy” and “Hammer Down.”  Then it settles down with “I Want to Come Home to You,” a western swing love song from the “Laura boxed set.”  It’s one of the change-ups that helps to keep the CD out of the rockabilly vortex.

The traditional “Black Mountain Rag,” even though they play it at warp 11, is another.  Chad “Speed Bow” Manning was brought in to play fiddle on the Deuces’ version which clocks in at a record 1:41.  Ray Harris’ “C’mon Little Momma” has held up particularly well since it was released back in Sun Records’ heyday.  The song was too sexy for radio play back then, but it’s just plain fun now.

Drummer Ricky Q makes his presence better known with one of his songs, “One Day You’re Here,” as does Chad Silva, indirectly, with the Deuces’ take on “Till I Get My Fill.”

Mitch Polzak played in Silva’s Haywoods for two years until they disbanded in 2006.  “Till I Get My Fill” was a great rockabilly anthem when the Haywoods did it and it’s also one of the strongest tracks on the Deuces’ CD.

Heck of a Catch gives a nod to the past with four tracks from the veterans, a nod to western swing, another nod to bluegrass with Ralph Stanley’s “Clinch Mountain Backstep,” and a nod to the present through all of the Deuces’ home grown tracks.  There’s more than enough rockabilly to satisfy the Greasers and Betties, and there are enough change-ups to keep everybody’s toes tapping.