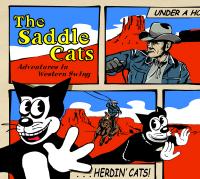 Mention western swing and most will think of Bob Wills, Texas or Oklahoma, but what about California?  Few realize that western swing was regional music until the Golden State laid claim to it.  Bob Wills moved to California in 1943 to join the 2.5 million (a heap o’ folks back then) who’d already escaped the Dust Bowl.  It was Southern California radio, music and movies that repackaged and sold the cowboy, singing or otherwise, to the world.

The CD is divided between standards and not-so-standard western swing tracks: all California born and bred.  “Roly Poly” is a Fred Rose song that’s been covered by hundreds of bands yet it was a first for Wills and California in ‘46.  The perennially popular “What’s the Matter with the Mill” is a veiled song, as music like this had to be back in the day, about the closing of a house of ill repute.  “Who Walks in when I Walk Out” is about cheatin’.  “You’ve Got the Right Key Baby, but the Wrong Keyhole” is about greener pastures.  Yep, all these themes were in western swing well before honky-tonk found them.

Instrumentals, which were popular back in the day, get their play too, and who’d have thought that a classic like “Oklahoma Stomp” was California born?

At its best this music flows and flows, and with four crack musicians plus Chon himself getting a fine country croon on, the Herdin’ Cats CD flows like the Big Muddy.  This is music for sittin’ a spell, sippin’ a little and watchin’ the sun go down; and the history lesson comes at no extra charge.

Don Burnham with and “without” Lost Weekend