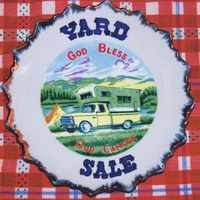 You might meet a wide-eyed, sweet smiling, corn-fed gal and find the soundtrack in your brain kicking into “Everybody Loves a Midwestern Girl.”  Or, it might happen while driving in unfamiliar territory when the melody “I’m ‘Lost’ and I can’t find my way” tiptoes across you synapses.  Or perhaps you’ll be shy of funds, and hear “Fell off the ‘Gravy Train,’ fell off of the gravy train…”  Or there could be a road tangle with a bad driver and “Don’t drive too slow.  Don’t Drive too fast.  ‘Don’t Drive Like an Ass,'” that will chorus through your brain pan.  In every case, you’ve entered Yard Sale‘s  God Bless Our Camper zone: a CD thick with aural crazy glue.

Officially an acoustic trio, Yard Sale has added some studio horsepower, including a harp, to give their second CD a full band sound.  All three – Melanie DiGiovanni (guitar), Denise Funari (rhythm guitar), and Jill Olson (bass) – write, sing, and put their own style into the songs and they cover three tunes.  One might expect a mish-mash with all this going on, but fast or slow, light or heavy, the songs play well with one another.

The CD is rich in its variety of inputs, yet remarkably seamless.  They skimmed the cream off their abundant material, invited a few pals into the studio (trusty Wally’s Sound), and developed a country and pop flavor that is special to Yard Sale.  They are as country as they want to be on Tom T. Hall’s classic “That’s How I Got to Memphis” or their own “Talkin’ Whiskey,” but they can also be the envy of the Shirelles on that girl group’s hit “Baby It’s You,” or with their own girl group remix of the Rolling Stones’ “Out of Time.”

Catch them at one of their potluck Sundays at SF’s Rite Spot, or at a CD party near you, or hear them now on YardSpace.