The free Hardly Strictly Bluegrass 9 fest comes to Golden Gate Park this weekend and here are some tips on this year’s line-up.  As for the bands, it’s all good, so even if you arrive early and park on a blanket in front of a single stage all day, you will be entertained. Going on Friday is especially good for blanket parking since only one stage at a time is in use. Bring a kid to the Star stage for the 10:30-12:30 shows where MC Hammer, who has built quite a reputation as a children’s entertainer, will get the youngsters shakin’.   And/or, plan for the Banjo stage from 2:00-7:00 for Poor Man’s Whiskey, Tom Morello: The Nightwatchman, John Prine, and Lyle Lovett & His Large Band. Saturday and Sunday will be packed with talent and people, so if you’re roaming rather than parking, check the Hardly-Strictly schedule and pick a route.  One Saturday route can include Laurie Lewis & The Right Hands (Banjo, 11:10am), slipping away a little early or arriving a little late for Buddy Miller at the new stage (Towers of Gold, 11:45),  Austin Lounge Lizards (Arrow, 1:05),  Dave Alvin & The Guilty Women (Star, 2:30),  songwriter circle with Tom Morello, Dar Williams, Steve Earle & Allison Moorer (Rooster, 3:45),  Nick Lowe (Star, 4:40), and again split some time between Nick Lowe and Rosie Flores with Jon Langford and the Pine Valley Cosmonauts (Arrow, 5:00), then Steve Earle & The Bluegrass Dukes (Banjo, 6:45). Next HWS recommends having dinner at Minh’s, an excellent, inexpensive Vietnamese restaurant one block from the Plough and Stars on nearby Clement where Belle Monroe & her Brewglass Boys/Shut-Ins/Gayle Lynn & her Hired Hands play at 9pm. Go home, pass out, then… Sunday’s route can include 11:00am Marley’s Ghost with Special Guest Cowboy Jack Clement (Towers of Gold, 11:00), Booker T. & the Drive-By Truckers (Arrow, 12:15), Doc Watson & David Holt (Banjo, 1:25), and a Rooster grand slam with Mike Farris & the Roseland Rhythm Revue (Rooster, 2:45), Mavis Staples (Rooster, 4:00),  The Knitters (Rooster, 5:30),  and Old Crow Medicine Show (Rooster , 7:00).  Then get some dinner, cross town and see John Doe & The Sadies/The Brothers Comatose at Annie’s Social Club. Then go home, pass out, report to work on Monday in a daze… yet again. 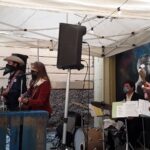