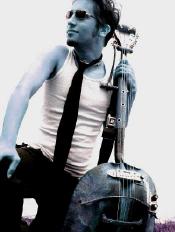 A marriage between folk and electronica was destined, so if Shovelman hadn’t come along someone would have had to invent him.

Why “Shovelman?”  Well, because he plays a snow shovel rigged to be a combination fret-less guitar and percussion instrument.  Said shovel feeds its sounds into an array of samplers, compressors and other foot-operated gizmos to put the tronic in folktronica.

Every song is mixed from scratch, starting with a simple beat which Shovelman will sample and build upon while layer after layer becomes less folk and more tronic.  The result is an interesting melange of bluesman Robert Johnson, beatnik poetry, no wavers Pere Ubu, Nick Cave and off-beat rapper MC 900′ Jesus.

Hicks with Sticks saw Shovelman at a recent Amnesia show and it was clear that there would be difficulty translating his playing into a sound file because a good part of the entertainment is watching him craft the songs on the spot.  The Dirty West CD would have been helped by a video track.  Come to think of it, this review will make more sense with a video track like “Excavating the Future.”  Come for the folk, stay for the tronic.

Click to watch a grown man play a snow shovel.