HI-RHYTHM HUSTLERS AIM FOR YOUR FEET 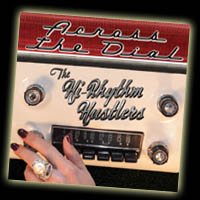 As if their name didn’t give the band away, dancing beats are what the Hi-Rhythm Hustlers are about.  Fronted by the inimitable Rockin’ Raul Castro, a dance instructor himself, the Hustlers’ live show combines Castro’s stage presence with the musicianship of veterans Mitch Polzak (guitar), Mike Walz (bass) and Jay Laude (drums) to squeeze all of the old school R&B to be had from a quartet.  But how to get what works on the stage onto a recording, ah, there’s the rub.

The Hustlers pull it off by calling reinforcements into the studio.   Chris Binnings the lead from Stompy Jones adds his voice to “Let’s Rock and Roll” and the piano is supplied by renowned SoCal keyboardist Carl Sony Leyland to rachet up the romp factor even further.  Local keyboardist-at-large Noam Eisen plays on Charlie Rich‘s “Right Behind You Baby” and a Hustlers’ original “One More Night.”  Pedal steel, back up singers, tenor sax and an accordion are scattered among the other tracks to provide variation while staying true to their boppin’ roots.

The 14 tracks are split between covers and originals, and interestingly the covers are consistently stronger than the originals, no doubt because tunes like The Searchers “Wow, Wow Baby” from 1958, have had 52 years of seasoning where the Hustlers, who played their first show in December of 2008, have barely had 52 weeks to season their material.   For example, “DeMarco’s 23,” a tribute to the venerable Brisbane honky-tonk, could benefit from something, perhaps more emotion or more mystery, to arouse the listener’s curiosity in a way that,  say, “Smokey Joe’s Cafe” does.   Their sexy “Cream Puff,” on the other hand, could never have been sung in the 1950s, but in 2010 Señor Castro, the song’s subject matter expert, can dive into it head first.  If you ears, feet and nostalgia genes are looking for a favor take them for a spin Across the Dial.
HRH site
MySpace
Video – “Wow, Wow Baby”