BIG B BOOGIES AND BOPS 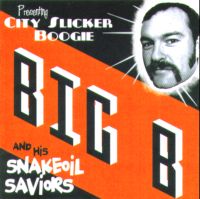 City slicker boogie is what he calls it, and that’s what the new self-titled CD from Big B and his Snakeoil Saviors delivers.  With only seven tracks one wishes it might have delivered a little more since it does leave the listener a tad hungry.

The songs are mainly coves like Buck Owens‘ “Cadillac Lane” which jump-starts the CD, and all have been reworked in the band’s style.  They are also songs, with the possible exception of “The Wayward Wind,” that have not been over-covered, so this CD is less of a rehash and more of a “snakeoil confection” to coin a term.  Patsy Cline and others have done “The Wayward Wind” as a ballad; Big Ben and the band do it as a dance tune.

Big Ben Beuttner handles most of the vocals, yet he has made room for the band’s other singer Adrienne Pfeiffer who delivers on “Three Cigarettes and an Ashtray,” one of the CDs two ballads along with “Abilene.”  Jennifer Jolly and David Phillips bring great presence to the tracks on piano and lap steel respectively, as does the Snakeoil horn section.  Ben’s got himself a big band and he’s a-gonna use it.

The packaging is “information impaired” as their site which is somewhat limiting because it would be nice to credit the fine production that went into these songs.  No matter, it’s the music that counts here and count it does.