New bands form and others fade away.  Uphill Both Ways is one of the new bands with a smooth, sometimes rocking, sound and samples that can be heard here…   The Stay Away Joes are a new rockabilly group with song samples on their MySpace page…  Small Gas Engine, which has the heart of a counrty band, wants you to listen to their songs and explain to them what kind of band they are…  The Mighty Slim Pickens will be taking a break following the departure of bassist Roxanne Chicoine.  If anyone knows a female stand-up bassist who likes to slap it around, get in touch…  Lady A and her Heel Draggers have at least one more show scheduled, but we hear that it may be followed by an extended break which would be regrettable as this band seemed to be hitting a stride…  Li’l Anne and the Tune Wranglers may be on extended hiatus as well. This band emerged from the Sweet ‘n’ Lo’s and was on a roll until the departure of Danny Santos. Belle Monroe, who plays guitar with her own Brewglass Boys, stepped in to play stand-up bass and sing, but she’s one busy gal.  Meanwhile, Li’l Anne, who has been at it steadily since the S & L’s, is thinking maybe she needs to take a break from the music biz…  It looks like the Shut-Ins are going the way of the Bootcuts as a band that can abide and endure for decades by playing rarely.  Mike Roper (uke, vox) has been devoting more time to Cheetahs on the Moon and Gayle Lynn and the Hired Hands, while John Poultney (guitar, vox) has become inspired to do original material.  Let’s hope these boys still have a few more Riptide Xmas specials in them.  Theirs is the only Hicks with Sticks-approved Xmas special on the planet. 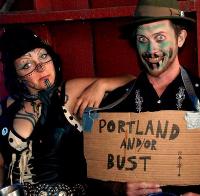 Larry Bob Roberts has been presiding over the first Tuesdays Americana shows at El Rio for about two years and presented his last one this month.  Roberts’ strength was in finding bands that are somewhere on the Americana spectrum but not necessarily in country, rockabilly of any other easily identifiable niche.  The Hobo Gobbelins who closed the run are a case in point, consisting of an uncertain mix of Americana, klezmer, Irish, old-tyme, Slim Cessna, sea shanty, and any other inspiration that comes in over their transom.

The 52 Week Club is the brainchild of Willie Tea (The Good Luck Thrift Store Outfit) and Tom VandenAvond that challenges its members to write a song every week for a year.  It’s free to join and about as simple as them picking the topic and you writing the song.  The line up so far is: Week 1: The Scout, Week 2: Sandpaper, Week 3: Baked Treats, Week 4: Them Travelers, and Week 5: Basking in the Cold Concrete.  You can catch up by writing one song about a scout who was sandpapering his baked treats while traveling and tanning over cold concrete.