HICKS WITH STICKS ON KALX

Updated Post 9-3-10
This felt like the best show Meaty Paws and I have done.  After four or five of them we’re getting our groove down.  Here’s the playlist: 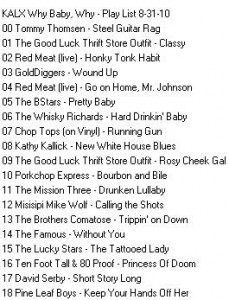 The first group through Kathy Kallick’s “New White House Blues” are all new releases, with Red Meat’s live CD being played four days since its release party.  Next are 2009 and early 2010 releases from Bay Area bands except for the last four tracks which were played to introduce lesser known bands that have toured the Bay Area.

Hicks with Sticks is working on getting a podcast going for these shows.  Stay tuned. 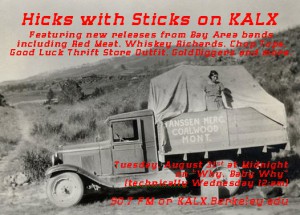 Original Post 8-31-10
Hicks with Sticks will be a guest on KALX‘s Why Baby, Why at midnight tonight.  Follow the link and tune in over the airwaves or via the Internet to hear the latest from Red Meat, The Good Luck Thrift Store Outfit, The Whiskey Richards, The Famous, The GoldDiggers, Chop Tops, The Mission Three and Kathy Kallick.  We’ll also play 2009 favorites from Bay Area Bands plus a set of music from bands that toured the Bay Area recently, were easy to miss, yet are bands you need to know (’cause they’ll be back) like the Lucky Stars, Ten Foot Tall & 80 Proof, David Serby and Pine Leaf Boys.

KALX DJ Meaty Paws is has his own show and is one of the rotating DJs for Why Baby Why.  He’s started booking HWS onto Why Baby Why every time there’s a fifth Tuesday in a month.  Our last show was at the end of June, the next will be in November, but for now tonight’s the night.