The secret sale of KUSF, the SFBOT festival, new releases from S.F. Bay Area twangers, vinyl junkies sharing their love, and two new twang venues are in the latest Hicks with Sticks News. 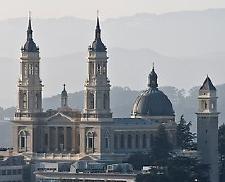 "For whom the bell tolls KUSF, if not for thee?"

The skull and crossed microphones are no more.  The University of San Francisco sold its station, KUSF at 90.3 FM, in a $3.75 million secret deal to the University of Southern California which was nothing more than a front for the station’s transfer to giant Entercom Communications, owner of classical KDFC.

A haven for non-commercial music and non-English language programs, KUSF went silent with no notice to its staff, students or listeners.  The station, whose frequency was donated to USF in 1973, now broadcasts classical music as KDFC.

Protest of the sale was swift and emphatic.  USF President Stephen Privett led a meeting that packed a 500-seat auditorium, but, like a contrite bishop explaining a pedophilia scandal, he adopted a demeanor of heartfelt concern to mask a familiar message, “The Church of Rome does what it wants when it wants.  Deal with it.”  SF’s Board of Supervisors will issue a non-binding resolution that “decries the loss of the cultural and community asset,” to provide the cover they need even as Privett feeds their resolution into his shredder.  Pray, pay and obey, y’all.

Naturally, this is going to put pressure on the greater Bay Area’s six remaining college FM stations as provosts, presidents and deans weigh educational and community responsibility against cash on the barrelhead, son.  Enjoy them while they last.  www.saveKUSF.org

San Francisco’s bluegrass and old-time music festival hits venues throughout the Bay Area from February 11th to 20th.  The festival, an 11-year-old production of the Northern California Bluegrass Association, is known for a rich assortment of West Coast and Bay Area acoustic Americana bands, though the event branched into electric, minimally, years ago.  Emily Bonn & The Vivants, The Good Luck Thrift Shore Outfit, Hang Jones, Gayle Lynn and the Hired Hands, Misisipi Rider and the Pine Box Boys, none of which come close to trad bluegrass, are among the stars that SFBOT will showcase.  The Stairwell Sisters, Dry Branch Fire Squad and 60 others will be keeping it true to its acoustic roots.   Schedule.

Four new CDs dotted the January twangscape.  Jon-Emery and the Dry County Drinkers, an edgy honky-tonk outfit from Sonoma County, has released one.   This Jon-Emery is not to be confused with the Jon Emery Band from Austin.  Here’s Sonoma County Jon-Emery’s video.

The East Bay’s 77 el Deora has cut its third, “The Crown and the Crow’s Confession”; and Marin’s Blue Diamond Fillups have given birth to their first.  Their “Drive Like Lightening, Crash Like Thunder” video remains a HWS favorite.

The Bay Area’s record collectors keep providing us with new surprises.  The latest is Joe Goldmark’s new site VinylBeat.com, which also links to his new blog on Amoeba.com.   It has four sections, one of which is an LP Label Guide with pictures of over a thousand labels and information on when the styles changed.  This is handy when trying to figure out if you have an original pressing.  Another section features “five high-end price guides that are more in tune with the market than any previous guide.”  Goldmark, who moonlights as the Fearless Leader of The Seducers, also manages Amoeba SF, so he’s got the vinyl value thing under control, unlike the many vinyl price guides that are rated “R” for ridiculous.

Other vinyl junkies have been spinning old school Friday R&B session, first at the Jay ‘n’ Bee Club, and recently at ReTox on 20th near 3rd in Dogpatch.  DJ’s Samoa Boy, Okie Oran, Sergio Iglesias and Rockin’ Raul are moving on.  Stay tuned.

The 50 Mason Social House is one of the newest venues for roots Americana.  They’re still working out their sound system, yet it’s nice to know they’re alive and booking.  It’s also hecka easy to get to being one block away from Powell Street Station.

The Presidio Yacht Club has got to be the diviest, blue collar yacht club north of SF’s Bayview Boat Club.  The Lonestar Retrobates play there every first Thursday.  It’s located just northeast of the north tower of the Golden Gate Bridge, at the east end of Horseshoe Cove in Fort Baker.  You reach the back of it’s building it’s by driving through a dirt parking lot with potholes deep enough to swallow a Smart Car.  The road then continues to the left, darkly, until the club and its parking lot appear.

Beer and food are affordable, Maria behind the counter is friendly, no one is wearing a Commodore’s hat or smoking a meerschaum pipe, and it’s view is spectacular. 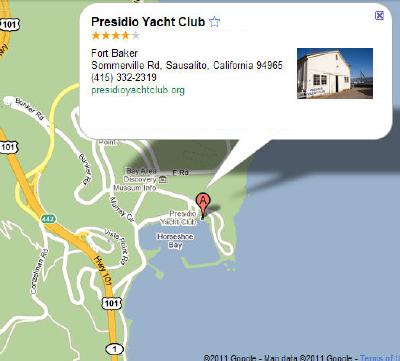