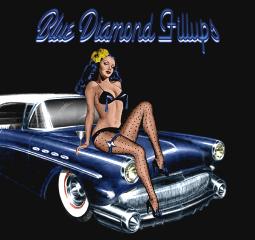 For Blue Diamond Fillups guitarist Jonnie Zaentz, the band’s mission is simple: play covers and rock.  This seems like a well-travelled road, yet JZ keeps it fresh by applying talents that many would like to see in one band, let alone in one person.

First, the dude packs the riffs to freshen up any cover tune.   “Snake Man,” one of the strongest cuts on a CD full of them, could have been a straight-up, four-chord chucka-chucka rocker, but Zaentz opts to pick rather than strum, laying in high, clean notes that swarm around each other like speedy little bees.

And who arranged these songs?   Who managed the song selection so well by favoring under-covered oldies and even freshening up “This Magic Moment,” a hit for The Drifters and (sort of) Lou Reed?  Who did the artwork?  Who produced the CD?  Who produced the BDF’s “Drive Like Lightening, Crash Like Thunder” video featuring old modifieds peeling down long-forgotten pavement?  We’ve probably missed a few other talents, but whatever they are, they’re all in a day’s work for Go-to-Guy Jonnie Z.

Vocalist Flash Rickets has never sounded better thanks in part to modern recording.  Lead singers are at the mercy of the elements in live performance: wonky PAs, stoned sound guys, loud drunks, and urban traffic can do more than make a few notes quiver; but all is clear inside the studio and if you don’t like it, you can always re-do it.  Flash gets his Elvis on during “Friend of the Devil,” he gets his Johnny Cochran on while covering Johnny Cash‘s “(Move on) Down the Line,” and he croons like Frankie on “Going Down to Big Mary’s.”

Neither “Drive Like Lightening, Crash Like Thunder” or “Big Red Rocket of Love,” two songs they do very well live, made it to the CD.  Perhaps they’re being saved for the BDF’s Greatest Hits comp?  Otherwise, with re-invention being the step-mother of necessity and all, the boys in the band have every reason to feel good about their debut CD.