The Mighty Slim Pickins have wasted away, but the Patsychords, Rumble Strippers, and a band to be named later are fattening up for the thrill.  Why Katharine Cole killed Kitty Rose.  Pirate Cat Radio doesn’t broadcast a soap opera, but has plenty of drama.  Milk Bar in the Upper Haight features a rockin’ new record hop on first Fridays.

There have been several attempts to derail the Mighty Slim Pickins, usually in the form of personnel changes, but lead singer Leigh Crow says this time it’s over for sure, as in really, really.

Three other bands have sprung from the MSP’s ashes. The Patsychords’ name gives them away; Roxanne Chick1, the MSP’s bassist before Lala, is a ‘Chord.  The Rumble Strippers are also new and Eden Heartattack, the MSP’s drummer, is now a Rumble Stripper. These bands will be twangin’ thar’ thang on the El Rio‘s patio on Sunday 3/12 along with Dolorata and Sassy, benefiting the SF AIDS Foundation.

The band to be named later is something Leigh Crow and MSP’s other lead singer, Nettie Hammar, have yet to brew up, but brew it they will. Daughter of MSP is only its working name.

Kitty Rose had been a regular at El Rio’s Cowgirlpalooza, at Dolores Park Cafe and assorted venues between SF and her home north in Ukiah. But Kitty and Katharine Cole, currently in The Battlin’ Bluebirds, are a persona and a person sharing the same hominid enclosure, so to speak. So if Kate killed Kit, it was nobody’s business but her own. Kitty Rose had put out three strong CD’s which was all she needed to do. Katharine Cole is on to newer things including a possible move back to SF, and a CD so dark it will make Marianne Faithfull‘s Broken English seem like a tanning salon.

The loonies really have taken over the asylum at Pirate Cat Radio.

By way of background, Pirate Cat was founded 14 years ago by Monkey (his legal name) to broadcast at 87.9 FM and stream over the web. The Federal Communications Commission shut down the broadcast side in 2010, about the same time that Monkey acquired a licensed NPR station, KPDO, in Pescadero, north of Santa Cruz.

Apparently an 80% interest in Pirate Cat had been sold to SF resident Raymond Chen, but Monkey maintains that Chen only bought 80% of the Pirate Cat Cafe which shares space with the station.  However, Monkey also told the DJs, who pay monthly dues to fund Pirate Cat, to pay Chen, then a month later told them to pay into what appears to be a personal account of Monkey’s. Monkey maintains that Pirate Cat, a non-profit itself, had been rolled into KPDO, hence the reason for the change of accounts.  The DJ’s rebelled and set up their own account. The Golden Rule of Capitalism is that he who has the gold makes the rules.  Pirate Cat Radio (a.k.a., the asylum) had been pirated by it’s DJs (a.k.a., the loonies), but not for long.  The station and site have both been down for weeks.

Monkey appears to have fled to Europe. He’s not taking calls or answering emails though he has been sending out press releases, which nobody believes, to “clarify” things. Meanwhile, PCR defections, notably to FCCFreeRadio, have been brisk.  Talk about a radio drama.  Monkey, however true a visionary, seems to have been napping during his leadership development courses. 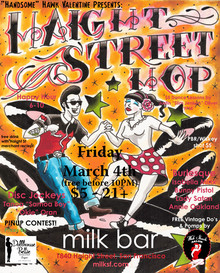 The first of its kind was held on March 4th and was such a success that there was hardly room to dance. The crowd came dressed for success and DJs Okie Oran and Samoa Boy dipped into their wonderful 45 collections to keep ’em jumpin’.  It’ll be free before 10pm too!