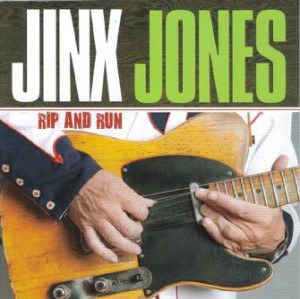 Reviewing the new Jinx Jones CD, Rip and Run, hasn’t been easy, not because it isn’t good one, but how does one explain its intricacies in prose? The key to it turned out to be re-ordering the tracks by putting all the instrumentals into one group and all the tracks with vocals in another. This CD is really two CDs packed onto one disc: one with the instrumental explorations we’ve come to expect from him and another with words and stuff.

The instrumentals represent a wide range of styles, the first of which, “How High the Moon”, is a lively, jazzy tune in the style of the jazz trio that the versatile Mr. Jones also leads. Next, the title track is a rocker in the spirit of Duane Eddy or Link Wray, and it simultaneously rips, runs, embraces and soars. “Vibro Erotica” is a luscious lounge track, while “Prairie Dog Daddy” is a western swing track; both of which are accented with Jinx Jones’ own “touches”. “Roma’s Song” is a soft, almost dream-like guitar study. These five tracks cover considerable ground, ranging as they do between jazz, rock, lounge, western swing and romance. Taken together, they are their own CD; one that’s titled All the Different Kinds of Fun in My Guitar. But nobody will buy that CD, and there was no place else to put them, so they’ve been scattered, something like big league pitcher’s change-ups, throughout Rip and Run.

The songs with the words and stuff constitute a fine honky-tonk mix all written by Jones who usually depends on the lyrics of others in songs he covers. Sin prevails throughout. “On Parole and Out of Control” is about a gal who, barely out of her orange jumpsuit, is already looking for trouble. “Never Live It Down” mentions local watering holes like the Saddle Rack, the 23 Club, the El Rio and the Shamrock, as starting points for drinking to excess then running afoul of bouncers and police officers from Fremont to ‘Frisco. And what would a honky-tonk record be without a song like “Doghouse”, where our hero brings on a storm of girlfriend trouble after sidetracking himself into a house of ill repute? Coming home reeking of liquor and cheap perfume hath never the fair heart of a lady won, not by a long shot.

The subject of sin in honky-tonk has been so thoroughly explored that it should not come as a surprise to find that some tracks are derivative. “No Beer in Heaven” doesn’t add much to “In Heaven there Is No Beer”, and “What Makes You Think I’m Lonesome” has been cloned from the “She Thinks I Still Care” extended family of songs. Yet even when the lyrics drift into the tried and true, there’s always something happening on the guitar to recapture the listener’s interest.

Jinx Jones’ CDs are about the guitar as the instrumentals on this one have done their best to explain. The best advice is to approach Rip and Run with a mind open to exploration rather than closed by preconceived expectations. Jones has set his own bar and leaves it to the listener to discover where he’s placed it.