CDs, like records before them, were keepsakes, but hardcopy in the 21st century — CDs, DVDs, records and books — are excess baggage for Generation Next.  Today’s music collectors don’t want to know who produced it, they don’t want the package, the artwork, or even the song titles.  Their preference is to rip it onto an iGizmo with 40,000 other songs, then toss the package.  To them (and by “them” we mean the whippersnappers, not you gramps), CDs are a souvenier, like a t-shirt.  Think of the Ramones who sold far more t-shirts than they ever did records, and plenty of local bands tell the same story.

So the rhetorical question is: what difference does it make whether the consumer ends up with 40,012 or 40,005 songs?  None.  Zip.  Nada.  So why are bands knocking themselves out to make CDs when EPs fill the same need?  EPs require less effort to produce, have lower recording costs, can be released more frequently, and offer a snapshot of the band in the moment, unlike CDs whose production schedule can drag on for years. 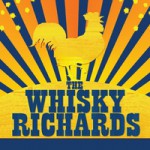 The Whisky Richards are hip to the EP groove.  They’ve put their pennies into studio time, focused on five essential songs for their second EP, wrapped them in an eco-friendly package, and are sellin’ ’em cheap, exactly as iConsumers want them.  Now some may sniff that a bare-bones EP, simply titled The Whisky Richards No. 2, is but demo fodder and not a “proper” CD at all.  This would be 20th century thinking.  The Whiskey Dicks, mod cons all, are on the cutting edge of hardcopy music marketing.

As for their souvenir, “Bank Robbers” is a honky-tonking number that deflates the myth about bank robbery, notably that it’s a career path with far more running than robbing. “Clementine” is a jaunty boy-meets-girl-then-blows-it tune, and guitarist Adam Roszkiewicz’ checks in with a tasty instrumental track called “Hazzard County Breakdown.”  CBS’s Dukes of Hazzard, BTW, were well-known for tearing up Georgia’s back roads in their ’69 Dodge Charger while playing the Whisky Richards’ first EP at full blast, something that works just as well in a California-friendly Prius with both EPs. 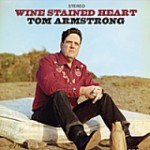 Tom Armstrong‘s Wine Stained Heart should have been an EP.  He’s been lying low for almost a decade raising two daughters who have now grown enough to allow for Armstrong sightings with the Burning Embers, Plain High Drifters, and a few solo shows.  Ten years have passed since 2001’s Songs that Make the Jukebox Play, and now he’s back in familiar drinking, heartbreak and sad cowboy territory.  His voice still flows over the songs, but the playing has lost a touch due to this band not having had much stage time.  Curiously, this CD has 8 of 13 songs related to drinking, a theme shortage that an EP would have self-edited.

Theme shortage or not, it’s great to have Tom back at any length.  He hasn’t lost a notch off his early Bakersfield sound which echoes Wynn Stewart, Bud Hobbs and Buck Owens.  “Wine Stained Heart,” “Four Years,” “This Honky-Tonkin’ Life,” “The Killjoy,” and “Tempting Fate,” are the EP cuts.  Look for his live shows coming soon at a honky-tonk where you can drink up and drink in all you like.

The Nearly Beloved kept a low profile for 11 years between their first CD and Where’s Bob?.  Given the many directions of these new songs, it’s difficult to say what kind of alt-country band this is, or whether it’s really an indie rock band with country and world beat influences.  Band leader Matt Lax emerged from the popular ’90s world-beat band Zulu Spear, which helps to explain the polyrhythmic licks that find their way into his whatever-country songs.

“Cool Fucking Sunset,” an example of his “whatever” leanings, plays like a halfway serious send-up of hippy sensibilities, though it does leave one wondering how, or if, it belongs.  The title track, in contrast, is a sharp take on the pitfalls of dating a woman whose friends regularly inquire about her ex.  Men who aren’t comfortable standing in another man’s shoes will take to this tune.  “My Memory” gets synapse-to-synapse with the unruly parts of our mind that cling to the past we’d like to forget while forgetting the one we want to remember.  “My P-Role Officer” is an indictment of the merry-go-round that passes for American justice.  Wcan always use more country songs about justice.  “Money Isn’t Everything” is a 99% song that takes evaluates this cliche for the rich/sop for the poor.  Where’s Bob? is a good collection of tunes in many respects and as an EP it would have been an even better one. 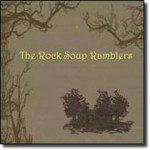 It’s difficult to say if The Rock Soup Ramblers should have made an EP.  They’re five guys with solid music pedigrees who hang out at Mike Romanowski‘s studio from time-to-time.  They’re more of a living room band than a performing band.  They jam away, Romo flips the switch on his recording equipment, and their CDs (this is their third) materialize, warts and all.

Life is good with free studio time, single takes and nothing to prove to anybody.  They don’t expect you to invite them over, which would be the best way to experience them, so the CD substitutes as the next best thing.  “Harry Ain’t Comin’ In,” “I Washed My Hands in Muddy Water,” and “Hey Baby, Que Paso” (warts of weak Spanish aside) are the tracks most likely to end up on The RSR’s Greatest Hits collection.  They’re particularly entertaining live at Cafe Royale at Post and Leavenworth where they play every time there are three full moons in a month. The Heel Draggers‘ CD swings like a pendulum do, but it too should have been…  oh, nevermind, you’ve already that part.  It does works great as an EP featuring Ayelet Arbuckle‘s vocals of which “Cheatin’ on Your Baby” leads the pack.  Regrettably, their 10-track debut, Out My Door, has been stretched into CD length with three instrumental tracks (30% if you’re doing the math), plus there are a few shaky male leads including “Sugar Moon,” a song that was written by a woman about a woman’s perspective on love.  Whazzup wid dat?  Bottom line is that the Heel Draggers’ lead singer doesn’t sing lead on very many tracks, and the band ends up diluting its strength by not letting her do her job. 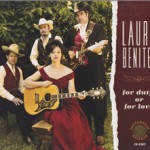 Saving the best for last, Laura Benitez, the better half of Mitch Polzack (Royal Deuces and 37 other bands), has hit one out of the park with her debut CD For Duty or Love.  Ain’t no EP needed here.

Picture, if you will, a lonely band widow, home alone except for her guitar and her imagination, night after night, waitin’ on her man who’s out playing another honky-tonk at the end of the Earth.  If that isn’t fuel for a bonfire of country songs, what is?   Caution: these songs will work their way into your head, starting with “Me or the Baby,” a song about a mom-to-be who is asking whether her impending marriage is “for duty or for love,” hence the title of the CD.  The more one listens to this CD, the more its songs tumble around in the ol’ cerebral cortex.  Look for infrequent Laura Benitez shows on the Hicks with Sticks calendar.  They are rare, but she delivers the goods live as well as she does on fhis CD.

Wrapping up, we have one EP that is an EP, four CDs that should have been EPs, one CD that’s a fine CD, and the hope that more CDs yet to be released will give the EP format serious consideration.  It’s the 21st century thing to do!

MORE BANDS ON THE RUN