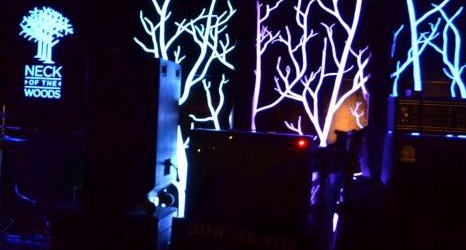 The Rockit Room has been in the news for all the wrong reasons: infuriated neighbors, regular calls for police, and one big league brawl that put a serious “harsh on the mellow” of S.F.’s Inner Richmond.  Things had deteriorated to where the place shut down for awhile so that ownership could regroup, which appears to have happened.

First up was a name change.  Hear ye, that as of December the 10th, 2012, the Rockit Room will henceforth be knownst as Neck of the Woods.  Not a particularly interesting name to be sure, but still, an important step toward recognizing the neighbors and smoothing their feathers.  Neck of the Woods’ new logo is a tree, and trees are the new motif within.  The walls, and even the poles that support the roof over the club’s spacious second floor, are to become trees; elves optional.

Door security has been tightened, though not strangled.  The pool table, and in fact, all games are absent from the much-improved downstairs bar — almost as a signal that Tecate guzzlers are welcome to guzzle elsewhere.  They also have a new booker, which signals a new booking policy, and this is where it gets interesting for Hicks with Sticks.

The Rockit Room had brought trouble upon itself by booking bands attractive to louts: metal, gangsta rap and “indy” pap.  Their biggest blunder was to book rapper Buju Banton, whose “Boom Bye Bye” supports the vigilante murder of gays.  That alone was enough to get them sentenced to 10 years in sensitivity training, but they’d booked Banton on October 12th, the anniversary of the death of Matthew Shepard, the gay teen whose 1998 murder became a landmark for hate crime legislation.  Tack on another five years in S.T. for that.

The point here is that Neck of the Woods is more than ready to attract nicer people by booking nicer bands, perhaps like those on the HWS Bands page.  HWS is going to give them a heads up; and maybe a band member or two or three, reading this right now, can get in touch and tell them how clean and sensitive your band is, and what a fine bunch o’ folks its fans are.  Maybe we’ll get more western swing, honky-tonk, alt-country or rockabilly in the reborn club.  HWS bands go particularly well with trees.