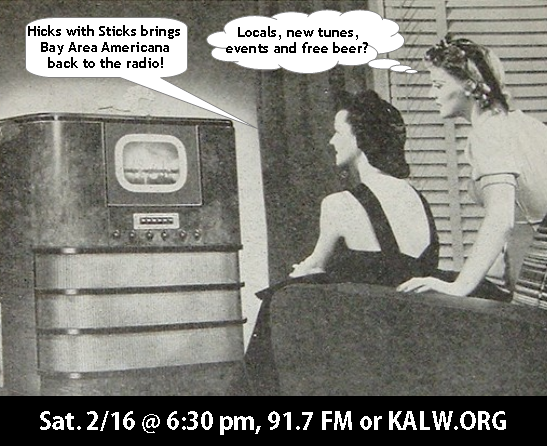 Here is the playlist with background info for Saturday’s Hicks with Sticks local talent radio special on KALW, February 16, 2013, 6:30-9:00.  The emphasis is on bands, including a few out-of-towners, that played during the weeks following the show.

“Riptide Rock” – Joe Goldmark and the Seducers pay an instrumental tribute to the Riptide, SF’s bar at the end of the earth, where they play every second Sunday.

“Weeping Willow” – Lia Rose is establishing her solo career in folk-Americana after having been a member of the late Or, the Whale.

“I Had Someone Else before I Had You” – The West Coast Ramblers are working on a new CD and released this rough mix for HWS to air-and-delete.  It’s always special to broadcast a track that members of the band who played on it do not have.

“Four Years” – Tom Armstrong is back, playing solo every third Sunday at SF’s Lucky Horseshoe.  “Four Years of changes/turned us into strangers/and I’m still wondering how/I knew her better/the day that I met her/than I know her now.”

“Church Street Blues” – The Brothers Comatose check in with a sad one centered around SF’s Church Street, a street four blocks from The Chapel on Valencia where they headlined the night the KALW show aired.

“Thoughts Have Wings” – Rusty Evans fronts a Johnny Cash tribute when he plays live with Ring of Fire, but his CDs have no Cash covers.  Instead, they are mainly his originals, like this one about how one’s thoughts can take a person wherever he or she wants to go.

“Can’t Find My Way Home” – Joe Goldmark teamed with Keta Bill on vocal to cover this Steve Winwood song from his Blind Faith days back in the ’70s.

“Crazy Street” – The Blue Diamond Fillups recorded this one for their newest CD.  Could Crazy Street be anywhere near Valencia Street?

“Jukebox and a Drink” – Sacramento County’s Dry County Drinkers write songs about drinking, more drinking and even more drinking.  They play the 23 Club in Brisbane next Saturday.

“Rosy Cheek Gal” – The Good Luck Thrift Store Outfit from Oakdale (across the Sacto Valley on the way to Yosemite) sing about the perils of a trust fund and a cocaine spoon.

“How the Old Girl Gets Around” – The Golden West Trio with Miss Kay Marie has not recorded any of their music that HWS is aware of.  How did this get aired?  HWS find a way.

Railroad Bill – Dave Alvin.  HWS took a break from local bands to give a shout-out to three SoCal bands that tour here regularly.  This was the first of three coming to the Bay Area.

“My Sinful Days Are Over” – Big Sandy and the Fly-Rite Boys was the third.

“Lord I’ll Die a Poor Ol’ Man – The Dirty Hand Family Band, is similar to the Brothers Comatose in their amplified acoustic approach to Americana.  This was from their new, debut CD.

“Howlin'” – Rockabilly from Texas Steve and the Tornadoes‘ new CD.

“What Makes You Think I’m Lonely” – Jinx Jones and the KingTones, who are comfortable in many styles, but lean toward honky-tonk and rockabilly, do country in the mode of  “What Makes Her Think I Still Care.”

“Empty Whiskey Bottles” – This is an oldie but a goodie from Calamity and Main,  one of Misisipi Mike‘s many bands.  “Empty whiskey bottles you left behind/ Inside the recycling bin of my mind.”

“Finding all the Answers” – Kit and the Branded Men find answers in the bottom of a glass.  A fine drinking song to add to the country music pantheon of them.

“Cheatin’ on Your Baby” – And what better way to follow a drinking song than with a cheating song by The Heel Draggers.  This one is vintage Red Foley.

“Don’t Mess with My Man” – The Cosmo Alley Cats carry the cheatin’ theme one step further with another vintage tune, this time from Irma Thomas.

“Georgia Johnny” – Emily Bonn and the Vivants are using Kickstarter money to get their new CD done this Spring.