San Francisco’s “People in Plaza’s” (PiP) features free noon-hour music all summer long including the western swing band the Saddle Cats who are among PiP’s diversified program.  Americana bands are plentiful as are jazz, Latin, world beat, blues, classical, pop, and various flavors within each of these categories.

Some twanging bands not well-placed on the Hicks with Sticks radar include another western swing band (Rhythm Roundup), rockabilly (3 Buck Chuck), and classic country (Skunkweed Junction), none of which have gotten attention because they don’t seem to play all that much.  We did see the latter two at last year’s PiP and found them married to the over-played side of country and rockabilly but who’s to complain when it’s free? 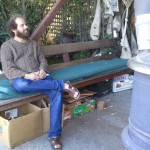 Jimbo Trout, who plays acoustic Americana from the 1870’s to the 1970’s, is free and entertaining, as are Vantresco and Axelrod, a duo that cuts a fine swath through Americana’s past.  Both are regulars at S.F.’s Atlas Cafe.

It’s nice to kick back, eat lunch and listen, but those who are enticed by the idea of mid-day dancing at a sunny plaza can choose from swing (Stompy Jones, Gaucho, Macy Blackman and Belinda Blair, formerly of Jellyroll), or blues, Cajun and N’awlins performers (Andre Thierry, West Coast Special, Delta Blues Trio, Bobbie Webb and Wendy Dewitt to name a few) who are ever ready to move your feet.

All that’s missing is a schedule on the PiP website which, at this writing, has only a broken link to a PDF.  They’re sure to get this right soon, perhaps by the time you read this.  Meanwhile, look for the schedule in double-page ads in local newspapers or here on Johnny’s Guide to S.F. for Cheapskates.