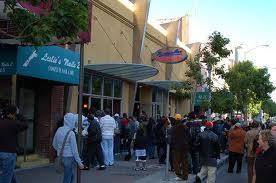 Hicks with Sticks generally supports the opening of live music venues, but in 1999, when the San Francisco Redevelopment Agency announced plans to reinvent Fillmore Street between Geary and Ellis, as a “Jazz District,” this site proudly called “Bullshit!”  By the Great Depression of ’08, this agency had put S.F. taxpayers on the hook for $12 million to Yoshi’s-SF, one of the clubs they sold their “jazz” bill of goods to.   Back then, HWS called “BULLSHIT!” in all caps and with several more exclamation points.  Yoshi’s-SF is now in bankruptcy and Rasselas, the other club the agency conned and subsidized, has finally closed.

Rewind to post-WW2 San Francisco when there were a couple of short-lived, unpopular jazz joints in the Lower Fillmore. Unpopular, yes!  A visit to that part of Fillmore during the ’50s and ’60s would have been quite the fool’s errand. Those who wanted jazz sought out Turk Murphy at Earthquake McGoon’s in North Beach or the likes of Jumpin’ Jack Schaffer and his predecessors who played Pier 23 back when it was a regular waterfront dive.  Fast forward to the 1990s and we find S.F.’s Redevelopment Agency blowing the Fillmore’s jazz blip into a “legacy” — a veritable “Basin Street West” — in order to revamp the neighborhood with soul-free, and soul brother-free, condos.

This background brings poignancy to the closing of Rasselas, a restaurant/club once located at California and Divisadero, which relocated near Yoshi’s-SF based on the Fillmore/jazz myth.  Rasselas’ exercise in futility has been nicely summarized in this recent S.F. Weekly article.

The bottom line is that jazz just isn’t as popular as the City, which clings to safe and sane musical tastes like jazz and classical, wishes it would be.  S.F.’s “Jazz District” was doomed from the start, as are so many projects cooked up by redevelopment agencies.  This is one of those unsung cases where we owe a thanks to State government and Governor Jerry Brown who last year abolished costly, misguided and ineffective redevelopment agencies in California.  Let the music live, but not like this.