Live music venues continue to open while existing performance spaces get permits.  Here are some highlights from the last six months.

Viracocha, (pictured above), which had been doing underground music and performance pieces in its warm, welcoming and total fire-trap of a basement, had gone legit and added a second exit to secure its permit, whew! The use of natural wood gave the space a cozy,  mountain lodge feeling that complimented the acoustic music that the venue favored.  Upstairs, Viracocha offered one of the most ecclectic gift, household and retro goods selections in SF.  They’d even added a wine bar.  But being cool and artsy can only carry a business so far and with a $10,000/month rent bill, there was no way for Viracocha to survive.  (more) 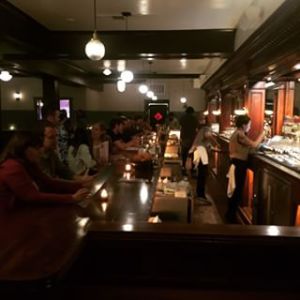 Cafe du Nord has reinvented itself  as a restaurant, though not quite the family style Basque restaurant that occupied the space many moons ago.  The du Nord that most know as a live music venue with food on the side, is now a restaurant with live music on the side.   Floor space has been reduced somewhat by expanding the kitchen, reorganizing the bar area and bringing the bathrooms up to code.

The stage remains, though smaller and better suited to restaurant-friendly bands.  The Swedish-American Hall upstairs will feature more up-tempo bands, though there isn’t much information on the new du Nord’s work-in-progress website.  One info-nugget is that the upstairs music will be managed by Noise Pop Concerts whose site does list some upcoming shows. 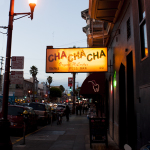 Cha Cha Cha in the Mission, secured it’s limited entertainment license earlier this year but this restaurant hasn’t done much with it.  Their website doesn’t list upcoming shows, there are no posters or calendars for events and not much else to warrant getting too excited about.  Their entertainment license is being treated as an afterthough for now, and just needs more time to develop.

The Valley Tavern secured an entertainment license in the heart of the in-vitrio fertilization capitol of San Francisco!  However did the Noe Valley vigelent let that slip through?  The bar kicked it off with rockers Heather Combs and Max Delaney on June 17th, but has been quiet ever since.  Have the ever vigelent awakened? 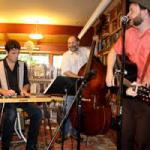 Misisipi Mike & the Players to Be Named Later at Bird & Beckett

Bird & Beckett, the little bookstore near the Glen Park BART station that could, has gone legit after years of presenting entertainment under the radar.  Poets, authors and bands — mainly jazz but also blues, bluegrass and honky-tonk — have found their way to B&B’s stage.  Most recently, Angela “Bad Mommy” Bennett has been booking “Surf-a-Billy Swing Time,” a second Sunday show with bands as varied as it’s moniker.  On July 12, she’s booked Todd Novak of the ever-elusive, ever-changing Cowlicks along with a few friends.

The East Bay is not to be left out of the action.  The Uptown may have closed, but Leo’s in Oakland and the Ivy Room in Albany are going strong.   Leo’s recently hosted one of Handsome Hawk Valentine’s “Hop” shows with the Bellfuries headlining.  The Ivy Room had been a haven for many live music fans during the ’90s and ’00s, but a change in ownership brought in DJed shake-your-booty music and killed the vibe.  That vibe is now inching back.  Jinx Jones and the Kingtones and Laura Benitez and the Heartache have played the Ivy Room, and Texas Steve & the Tornados are booked for July 31st.

Much has been made of venues closing — Veraconcha, Club Cocomo, Red Devil Lounge, Savannah Jazz and, likely, Bottom of the Hill — but as some close others open including those mentioned above, Rossi’s 1906 in Santa Rosa, the Twin Oaks in Penngrove, Doc’s Lab in San Francisco, and Zodiacs in Petaluma.  The music doesn’t stop, but it does move around.