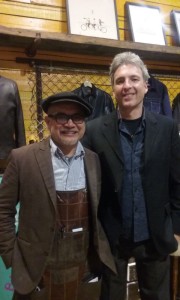 Amado’s, which replaced Veracocha at Valencia and 21st in SF, opened in 2016 as a custom tailoring shop upstairs and continued, sporadically, as an entertainment venue downstairs, then it closed temporarily in 2017 for a seismic retrofit.  HWS asked David Quinby, one of Amado’s partners what the future will bring.

The answer is a retail outlet, likely to feature records and music, in the front portion of the street-level floor with food and beverage service in the back portion and music again downstairs.  The seismic retrofit is about finished and there’s a hearing in May for their entertainment license, which is probably more about a renewal than a start-up since the venue had acquired an entertainment license under Veraconcha’s management.

They’re be more build-out for the restaurant, so we can expect Amado’s to open in late Summer or early Fall.  There is a possibility that the music will start sooner because the music space, perhaps to be named Amado’s Grotto, is ready and seismically safe now.