The number of live Americana music venues in San Francisco continues to grow.  Here are updates on The Valencia Room (formerly the Elbo Room), Ocean Ale House, Milk Bar, The Devil’s Acre, Amado’s and Westwood; plus an update on Oakland’s Parkway Lounge. 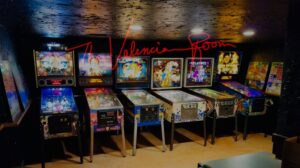 The Elbo Room was once destined to be condos, but it’s still a bar, remodeled, cleaned up and renamed The Valencia Room.   The DJed music leans toward phat beats.  They kept their pinball machines and plan to ramp up live music, but the new vibe suggests that Americana won’t be high on their list.  Fans of Speedy’s Wig City, which had a great Wednesday night run of honky-tonk and rockabilly during the Elbo Room’s last decade, will only remember when. 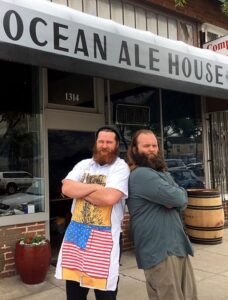 The Ocean Ale House has been booking (mainly) jazz bands five nights a week, but blues, funk, Latin, and hard-to-classify bands like the Flying Salvias are finding their way to this Sunset district draft house.  There are a lot of “whodat?” bands on their calendar, which usually indicates a low paying gig.  Mr. Chuffey’s Hi-Fi Hayride is booked for September 26th, promising, “surf, rockabilly, and classic country perfumed [sic] by Huntley Barad (vocals/bass), Steve Lussie (guitar), and John Pearson (drums).”  Who dey? 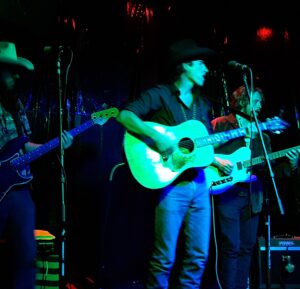 Milk Bar in the Upper Haight has been going strong and booking live music for years, and recently increased their Americana offerings thanks to Shelby Ash Presents, SF’s leading producer of rockabilly, alt-country, honky-tonk and bluegrass.  Laura Benitez and the Heartache, The Bitter Diamonds and Leo Rondeau (right, on tour from Austin) are among those who’ve played there over the past six months.  On October 4th, Milk Bar will be having its Third Annual Hardly Strictly Aftershow featuring Hot Mountain Dips, One Grass Two Grass and Great North Special. 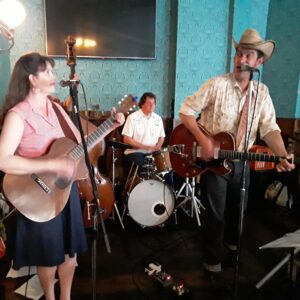 The Devil’s Acre, located in North Beach, occupies the Columbus space that was Pearl’s, a jazz club.  Pearl’s stage and live music disappeared when a series of owners sought to establish various restaurants.  Now it’s a bar with echoes of SF’s Barbary Coast.  Nashville Honeymoon (left) plays an early show every first and third Monday.  Jack Cholin, the GM, is looking for more bands in the Americana vein —  and musicians, tell him Hicks with Sticks sent you.

Amado’s at 21st and Valencia occupies the space where Veraconcha once sold eclectic merchandise and held shows in its roomy basement/auditorium.  Amado’s has added a mezzanine to the ground floor, which functions as a bar, DJ, and live music space.  Joe Goldmark and the Seducers gave Amado’s its honky-tonk baptism on August 30th.  Spiritus Cabaret performed downstairs on August 24th.  This brief video looks at Amado’s from inside out.

Westwood, the country themed bar, with the mechanical bull shown at the top of this page, has opened on Lombard near Fillmore.  It’s owned by the same people who run Jaxson which is around the corner from Westwood.  Mitch Polzack and the Royal Deuces played Westwood’s first live music event on August 29th.  The mechanical bull was not operating that night, thankfully.

Adding a item of East Bay news to this post, the Parkway Lounge in Oakland has changed hands leaving the twang gig hosted by Crying Time, and written up in Hicks with Sticks News, without a home.  Nevertheless, Crying Time will persist, perhaps at The Golden Bull on 14th near Broadway, and BART.

Total score: seven up and two — the Valencia Room and Parkway Lounge — not necessarily down, but at least in transition.