Music venues continue to change as live music fades as a entertainment option in the age of the Internet.  The Golden Bull and Sound Room, both in Oakland, are on the rise.  In San Francisco, the Rite-Spot stumbles but doesn’t fall, while Cha Cha Cha and Amnesia have fallen and are unlikely to get back up as far as live performances are concerned. 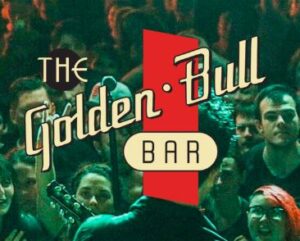 The Golden Bull’s rise follows the Parkway Lounge‘s fall.  Jill Rogers and Myles Boisen of Crying Time had been hosting monthly shows at Parkway until that venue changed hands and dropped live music.  They’ve found a new home at the Golden Bull on the fourth Sunday every month beginning in January.

Amnesia, located on Valencia Street in SF, will close for renovations at the end of March.  Live music will likely get the heave-ho as the venue, which only has a beer and wine license, plans to re-image itself as an upscale beer bar.  There have been vague hints about music continuing as in this article, but given changing tastes and Valencia Street demographics, the future doesn’t look good for music in general, and Americana in particular, at Amnesia. 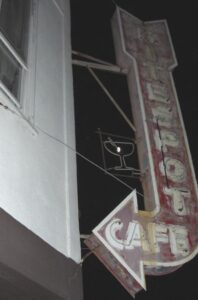 The Rite Spot remains open as a restaurant and bar, but has had to cancel all its live music while it goes through an arm wrestling contest with the City of SF over it’s music permit.  Early this year is the hoped for resumption, but SF is legendary for drawing out these contests.   (The venue’s sign was obviously unlit when the picture at the left was taken, so what’s the bright white light shining in the sign’s cocktail glass?  It’s an amazing convergence of the camera, their sign and a full moon captured by the Hicks with Sticks photography team.)

Live music has always been a red-headed step-child at Cha Cha Cha, a restaurant and bar on Mission Street.  Some twanging bands appeared sporadically over the years, but the closest it’s come to regular performances has been salsa on Tuesdays which abruptly stopped this year.  HWS dropped by to find out more, but nobody seemed to know where it went, why it went, or if it’s coming back.

The Sound Room in Oakland is similar to the Back Room in Berkeley.  Both are sit-down music-focused venues that lean toward acoustic Americana, kinder gentler blues and jazz.  The Sound Room grew out of the East Bay’s well-established house concert scene.  It got too big for its house, moved to uptown Oakland and, thanks to its success, now plans a move to another Oakland space as soon as renovation and permitting hurdles are cleared.  Unlike the Back Room, the new Sound Room will place more emphasis on food and drink.

Aging audiences are driving live music venues up and (mostly) down.  AM and FM radio are all but dead for anything but corporate music; vinyl, tapes and CDs are all but gone because precious few from the under 40 set want media anymore.  They don’t want artwork.  They don’t want liner notes.  They don’t care who wrote the song, who produced it, or who played on it.

All it takes is one hit of the “like” button and the Internet can insure that they will hear that type of music, and nothing but that type of music, now and forever.  This leaves precious little space for hearing different styles or appreciating live music as an entertainment option.  It’s sonic wallpaper über alles.  Resistance is futile but Hicks with Sticks will never surrender, so the two of you who cared enough to read to the end of this article can rest assured.