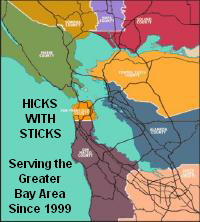 Hicks with Sticks is the site for roots Americana, western swing, alt-country and rockabilly in the San Francisco Bay Area.

Hicks with Sticks began as a radio show in October of ’99.  It was an era before social media, and an e-letter told listeners about up-coming guests, new CDs, and news about bands that fit somewhere between the acoustic stylings of bluegrass and old-timey, and the electrified angst of cow-punk and psychobilly.

But video really had killed the radio star in the MTV dominated ’90s.  A new generation of musicians from a mixed bag of singer-songwriter, surf, new wave, punk, were turning to western swing, Bakersfield country, California rock and Memphis rockabilly for inspiration.  Hicks with Sticks radio, which featured live bands, CD releases, a calendar and interviews, provided local twangers with a voice.

Still, tastes in radio had changed from local to global as the Internet and satellites began to stream music.  As the HWS radio audience idled, the newsletter continued to grow, and so did its coverage.  Stompin’ Steve Hathaway added the calendar, the range of news topics broadened, and it’s reach extended to places within driving range of venues from Santa Rosa to Santa Cruz and west of the Oakland Hills.  The newsletter morphed into this website in 2002 and, as always, there are no ads, no spam and never a cover charge.

José Segué (pictured left and above on the banner) writes Hicks with Sticks blog, maintains the Hicks with Sticks Facebook page, showcases local music on KALW (91.7) or KALX (90.7) every 2-3 months, and enjoys live music 2-4 times per week.   He’s produced live music, hosted events, published videos of local and touring bands, and is the designated dance partner for the willing.

Stompin’ Steve Hathaway maintains the HWS calendar and hosts “The Cupertino Barndance” on 91.5 FM in KKUP Cupertino every Sunday from 9:00-Midnight.  He’s also the webmaster of www.WesternSwing.com, which is a full-featured, free site dedicated to western swing past and present.

Email JoseSegue at this site’s URL about new releases, up and coming bands, radio/MC/DJ gigs, scandals and other items of interest to the Hicks with Sticks Nation; or to just say “hi”…  but please, no gig/calendar-related email.  For that, add Steve at WesternSwing dot you-know-what to your gig announcements list.  Bands listed on the HWS Bands page are the main focus of the Calendar Page