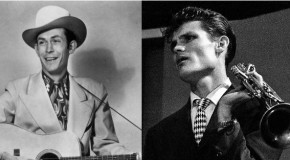 “I Saw the Light” (Hank Williams) and “Born to Be Blue” (Chet Baker) are two equally mediocre biopics with radically different responses from critics.  Both pictures portray musicians on the lost highway: Williams on

McGrath’s in Alameda, the leading supporter of live Bay Area roots music, is losing its lease in May 2011 and ending ten years at it’s current location.  Owner Peter Barnato plans to relocate  his