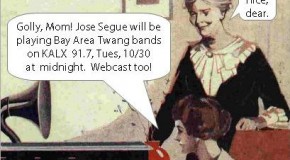 UPDATE 11/2/12: The track list from the show has been added to this post.  Click to view. Hear a passle of Bay Area twang, mainly new releases, from the B-Stars, Earl Brothers, Blue Diamond

Few people own turntables, but bands like the B-Stars aren’t releasing 45 rpm singles for commercial success.  Vinyl releases in 2012 are more about racking up cool points and ramping up street cred.  Clever marketers that they are,

The Silver Minx summed it up by calling Viva Las Vegas an ADD delight.  Lack of cloning technology prevented everyone from attending all the concurrent shows and events they wanted to see, and it

The B Stars felt that their first full-length CD was long delayed but in reality their timing was fine. What took time was adding steel guitar to the band, a move they made in