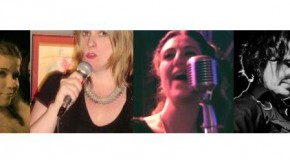 The Emily Anne (Reed) Band is the latest “Emily band” to emerge on the Hicks with Sticks radar.  She’d been doing 30’s and 40’s swing and jazz numbers, but her latest combo leans toward

COUNTRY CASANOVAS IN IT FOR THE FUN

’60s country covers are the mainstay of the Country Casanovas repertoire, and what other reason but fun can there be for playing songs like “Honky Tonk Man,”  “Heartaches by the Number,” “Pick Me Up