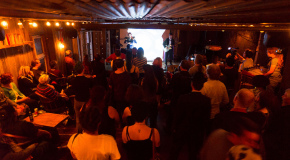 Live music venues continue to open while existing performance spaces get permits.  Here are some highlights from the last six months. Viracocha, (pictured above), which had been doing underground music and performance pieces in its warm, welcoming

2014 will see changes at performance venues Café du Nord, Savanna Jazz Club, Club Cocomo and Veracocha.  Café du Nord, which stages at least one Americana show each month, has been sold to restaurateurs who own West of