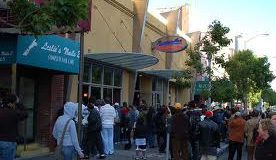 Hicks with Sticks generally supports the opening of live music venues, but in 1999, when the San Francisco Redevelopment Agency announced plans to reinvent Fillmore Street between Geary and Ellis, as a “Jazz District,”

The name Yoshi’s is synonymous with jazz in the Bay Area, so it was a surprise to find Dan Hicks and his Hot Licks with mando-man David Grisman, Rhett Miller from the country-influenced, alt-rock