Venues and Bands Recover from Covid …or Not 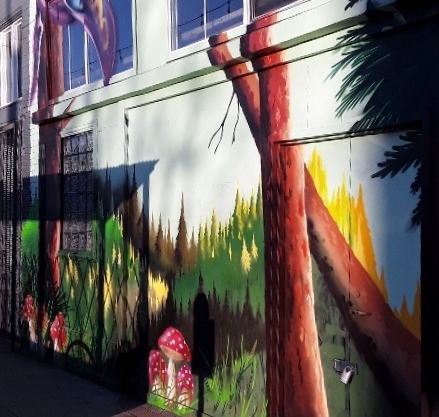 Let’s get the “nots” out of the way first. Amnesia, the last of Valencia Street music dives, dating back to the ’80s when Valencia was a rough street, has been gutted: no stage, no wood and copper-topped bar, and a bright future as a hipster enclave. That’s the bar’s new, botanical facelift pictured above. The Revolution Cafe on 22nd Street closed early in 2021, and the good news is that it has just been acquired by a new owner intent on keeping the music going. “The Rev” has provided stage time for bands that may not have a strong draw but possess interesting talent, like Classical Rev who are conservatory-trained musicians. A little further up Mission Street, Brick and Mortar, which regularly staged shows though little in the way of Americana, now operates largely as a Louisiana street-food restaurant. There were sputtering attempts to clear out the tables and have shows at night, but that died out during the latest Covid wave. Starry Plough and Askenaz, both in Berkeley, and Speisekammer in Alameda are well-established venues that have also either closed or pared back their live music.

Staffing is a problem everywhere. Club Deluxe has been heroic keeping live going on weeknights, but staff shortages have meant cutting back to a single band to fit into its shorter hours. Amado’s shortened its hours and closed for two months and restarts live music this month.

Live music throughout the seven Bay Area Counties are not only holding on, but increasing. Black Star Pirate BBQ in Richmond, Roxx on Main in Martinez, Starling Lounge in Sonoma, Papermill Creek Saloon in West Marin, Brewsters Beergarden and The Big Easy in Petaluma, Lucca Bar & Grill in Benicia, and Middle 8 in Pleasanton are among them. The Golden Bull in Oakland is ramping up its Sunday afternoon Americana shows.

And back in San Francisco, Zeitgeist has picked up its Americana bookings by hosting Crying Time and Nashville Honeymoon every first and third Wednesday of the month.

All these venues and more can be found on the revised, cellphone-friendly Hicks with Sticks “Venues” page which includes links to their calendars and Facebook pages. Check ’em out.