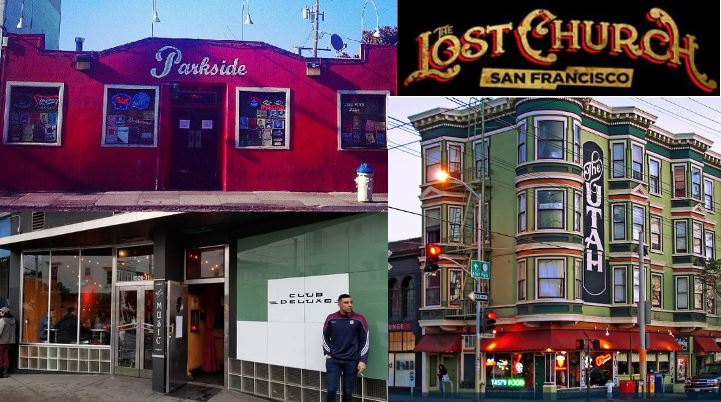 Thee Parkside has been booking “Twang Sundays” from 4-7pm but it’s been somewhat irregular and most of who they’ve booked have been unknowns to Hicks with Sticks. Beckylin & her Druthers played there in early October and since then Hicks with Sticks has forwarded some band suggestions to the club. Twang Sundays at Parkside were popular in the 2010s until the club’s main booker in those days had the sound person, who’d also booked Sundays, dismissed. The quality of the bands fell off and so did the audience. Twang Sundays can rise again if the club engages bands with some name recognition and that’s exactly what HWS has forwarded to the current booker.

Hotel Utah‘s music fell silent during the pandemic but regained its footing in October. They’re limiting shows to about ten nights per month (probably because of staffing shortages). Hotel Utah has been particularly good about opening its stage to upcoming musicians and supporting worthy causes. November 17-19 for example features 15 bands playing a three-day benefit for @abortionfunds.

Club Deluxe, which had been threatened by closure, has renegotiated its lease and is undergoing remodeling. When remodeling started in September there was a ridiculously optimistic rumor that they’d reopen by November. The latest rumor is about reopening on New Year’s Eve. We’ll see. Many unpleasant surprises await those who start opening walls and tearing up floors in old SF buildings.

The Lost Church has returned to San Francisco at 988 Columbus, about a block from Bimbo’s, and early reports are favorable. Its former location on Capp Street had its charm but difficult sight lines, limited seating, and a long and winding path to refreshments and bathrooms presented challenges to audience members. These challenges have been met at the new location. Many fine performers have played — and will play — the Lost Church and some of those listed on the HWS Bands page are among them.

Of course any local or touring bands who play these venues will be on the HWS calendar. Other links in this post connect to the venues’ calendars for listings of their shows.