When it comes to sound, Porkchop Express doesn’t seem to catch many breaks at its live shows, and their CD release party for Fault Lines and Good Times was case in point.  It took place at the best dive bar in SF’s Financial District, Beale Street Bar & Grill, where the band, not necessarily well-rehearsed or entirely sober, played without luxuries like sound checks, monitors or a particularly music-friendly room.  As it’s been at shows past, the HWS Music Appreciation Team left wondering how the band, which has ranged from a 5-piece to an 8-piece, would sound with a decent mix.  Fault Lines and Good Times answered that question with two thumbs up.  Cowboy hats off to Giovanni Moro at Zoppa Studios for giving us a fighting chance to hear what their original songs are actually about.

The CD kicks off with “Banjolero,” a ballad where the bride-to-be confesses her outlaw past while the bachelor-soon-not-to-be explains he’s a marshal who’d been sent to bring her in.  Weak Spanish aside (she’s a bandolera), it’s an original look at the rocky road to marital bliss held in tension by confessions that take place at the altar in front of the priest, Jesus and guests.

Irony, tongue-in-cheek and veiled innuendo are mother’s milk to this band.  “Crop Circle Waltz” is a my-baby-done-left-me song where the heartbroken hillbilly at its center sees the UFO that’s just landed on his farm as an ideal escape from his misery.  “Well my space friends have come/Not a moment too soon/So I’ll just go and take/A flyin’ fuck at the moon.”  Now that’s poetry.

“Christicles” is The Bible according to Porkchop Express which has a kinder, gentler approach to our peccadilloes like sex and blasphemy than the God of the Old Testament.  When it comes to forgiveness, Porkchop heels closer to the Laddy-o than the Daddy-o, with a notable exception for cheatin’ women!  Apparently she didn’t learn her lesson the first time in “I Shot My Wife (Again).”

It’s these original twists on familiar themes that bring the listener back to the CD for repeated plays.  Many of the songs do not click on first listen but as we decipher them song by song, the porkchopian gestalt begins to permeate our consciousness like the afterglow of a hayloft tryst.

Pork on down to hear them at the Hotel Utah on October 16th. 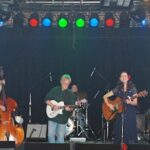 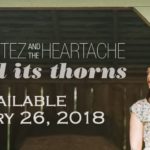