In Songs from the Stoop, the debut CD from The Brothers Comatose, the band has captured much of the joie de vivre of their live shows on a studio recording.  This is a band that doesn’t fit into a handy category like bluegrass, country or rockabilly but it is definitely Americana.  Footstompabilly perhaps?

It’s a contradiction to be sure, but even the downer songs like musing about hard times in “Church Street Blues” or their cover of the Rolling Stones’ maudlin “Dead Flowers” manage to lift themselves above their subject matter thanks in part to Philip Brezina‘s fiddle and Alex Morrison‘s banjo licks which reinforce that even the worst of things aren’t as bad as they might seem.  “Pine Box” is about a low as the Brothers get, but once again simple banjo chords offset the mournful musical saw of guest musician Tobias Weinberger. Even the drowning suicide of a heartbroken swain in “Down to the River” gives the listener pause to think that the guy’s troubles are beneath the golden waves in the just way that he wanted them to be. 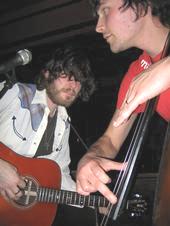 The celebration begins with the lead track “Trippin’ on Down the Mountain” a song about what could have been a simple hike in the woods that is so infused with beatific imagery that the listener becomes part of the experience. And most of these songs are about personal experience: where I was, how I felt, who I met and how I did what I did, but this CD is far from self-absorption.  It’s more like a broadcast where The Brothers Comatose produce the programming and the listener can do with it what he or she likes.

The CD does flag somewhat toward the end, but it remains a fine start from one of the most enjoyable Bay Area bands to have emerged in the last few years.  They’ll be at Amnesia in SF on April 10th and if that show is anything like their CD release  party held at Cafe du Nord a few weeks ago it’s not to be missed.   Site. MySpace.

HI-RHYTHM HUSTLERS AIM FOR YOUR FEET