NO MORE JOHNNY NITRO? WHAT?! 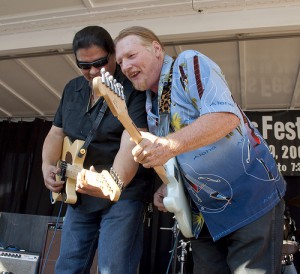 Johnny Nitro leaning a lick toward his pal Daniel Castro

What?! is the reaction of those who knew him upon hearing that San Francisco bluesman (not the WWF action figure) Johnny Nitro passed away suddenly on February 19th.  He’d played his regular Friday show at The Saloon in North Beach just the night before.  He was 59.

Nitro was a great bluesman who drew his influences from the Elmore James/Robert Johnson era.  He taught at Blue Bear School of Music, put bands together, seasoned many in his own band, and launched the careers of more than a few players.  He was at the pantheon of musicians who never made it to the big time: a poster child for a Music’s Not Fair award, because while other white blues players of the ’60s and 70’s, like Bonnie Raitt, the Winter brothers, George Thoroughgood and ultimately Stevie Ray Vaughn, moved onto international stages, he continued to labor at little, now-forgotten S.F. dives like Rockin’ Robins.

His ever-reliable Friday night show at The Saloon in North Beach was guaranteed to get everybody dancing to basic bar band blues including the unsinkable “Mustang Sally.”  He wasn’t a “Mustang Sally” kind of musician.  Like all real bluesmen he was sick of it, but he was always willing to give the people what they wanted, and making them happy made him happy.  Those who knew the trick would wait until the third set when everybody had drunk enough to stop caring about what he played, then drop a few bucks in the tip jar and ask him if he could play any old school blues.  That was how to get to the real Johnny Nitro on a Friday night.

He was a regular at the Saloon on Sundays too.  That was another time for the real deal Johnny.  He knew absolutely everybody in Bay Area blues and welcomed them to the Sunday stage to play their licks and sing their songs.

During the late ’90s he produced a blues jam at a club called Blues on Lombard near Fillmore in S.F.  It was the coolest music that the Marina district had heard since Paul’s Saloon on Scott near Lombard closed.  He’d bustle about putting bands together on the spot and they would sound great.  When asked how he could create so many instant, unrehearsed bands that were so good he responded, “I can tell just by talking to a guy what he can do and what he can’t, so I just put the ones with similar ‘can dos’ together and let ’em go.”

Now he’s a regular at the Great Gig in the Sky where he’ll surely be, as he’d always say, “Drinkin’ triples ’til he’s seeing double and feelin’ single,” for eternity.