The Silver Minx summed it up by calling Viva Las Vegas an ADD delight.  Lack of cloning technology prevented everyone from attending all the concurrent shows and events they wanted to see, and it was challenging to walk from one place to another without running into someone to talk about going someplace else.  Growth in attendance, bands and events did nothing to diminish VLV #14; growth only made things better as those who packed the Burlesque Competition, Tiki Pool Party, the main stage area and other events can confirm.

The B Stars, Midnight Trio, Stompy Jones, Thee Merry Widows and Jinx Jones and the Kingtones were on hand to hold up the Bay Area’s end, but of course the surprises for Bay Area twang fans came from bands that don’t usually play here.

Li'l Mo & the Dynaflos Doo-Wop on the Main Stage

Li’L Mo and the Dynaflos opened the first evening on the main stage and bowled everyone over.  Hopefully Tanoa “Samoa Boy” can get this LA combo into the Verdi Club.  Here’s a quick taste of the doo-wop bop that had people still hanging around for CDs and autographs an hour after their show.
Video: Li\’l Mo and the Dynaflos – \”Juanita\” 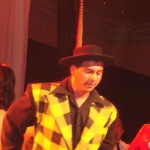 Getting back to Rockabilly, Hi Q’s from LA were really on it with Carl Sonny Layland sitting in on keys.  Their YT vids range from old to lo-fi, neither of which do them justice, but this one’s got some nice production with vintage road-worthy illustrations.
Video: Hi Q\’s – \”Speed Limit\” 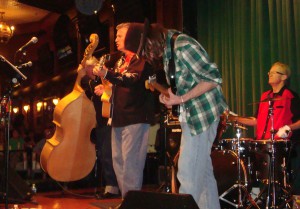 The Redline Rockets where a very pleasant surprise hitting the Brendan’s stage with strong songs and a no-frills delivery.  Their video catalog is a bit shaky, but even the wobbly camera work on “Marie, Marie” can’t hide their rockin’ creds.
Video: Redline Rockets – \”Marie, Marie\”

The Twangshifters from Portland, Oregon backed their strong stage performance with some hot chops and Bayou Bettie gettin’ naked, which, mercifully, was not to prop up their performance, but to enliven it.  Listen to Sara Barry get soulful, sultry and growl on “Chain of Fools”. 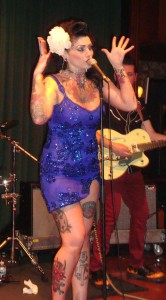 Sara Barry Frontwoman for the Twangshifters

Video: The Twangshifters – \”Chain of Fools\”

Sound quality, which hung in there at all stages, was another very pleasant surprise at VLV 14.  Oh, how we remember walking the main room at VLVs of yore searching for the few islands where the sound was bearable.  VLV14 sound was only a little rough at the back of the Bienview room, and when Big Sandy with Los Straightjackets, packed that room the sound got so muffled that he blew his voice out.  Joining Deke Dickerson at Deke’s Guitar Geek extravaganza the following day, Big Sandy could hardly croak out a tune, but by Sunday he was on the mend. 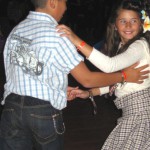 They've Been Coming to Vivas Since They Were Embryos

Kids, though not many of them, were another pleasant feature of VLV 14.  Indeed, some of them had been coming to Viva since they were embryos, so getting with the program was no problem for them.

Blues bands, which were completely absent in earlier incarnations, turned out to be another fine addition to the mix, particularly as they ripped it up all Friday and Saturday night in Brendan’s Pub.  At least one couple, videographers Larry and Nikki who live in Vegas, rented a room at the Orleans just so they could hang with the all-night blues parties.

For more, find 40 captioned VLV 14 pictures in Jose Segue’s (public) Facebook album, and read the next HWS article, (pre-VLV) in case you missed it.