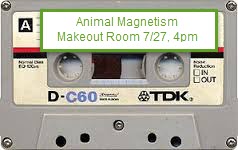 San Francisco Mixed Tape Society hosts quarterly gatherings, like the one being held at the Makeout Room this Sunday at 4:00, to let music fans tap into their inner DJ.  The idea is to make a mix on a theme — this Sunday’s is “Animal Magnetism” — and share it at the event.  Files, CDs and cassettes, with a free beer going to anyone who brings a cassette tape, are the formats of choice.

But what is “Animal Magnetism?”  The obvious images are those of a chiseled hunk or raven-haired goddess, but of course there are magnetic senses in animals like the one that helps fish school and birds navigate.  What about magnetism itself, like it’s effect on Michael Faraday who it drew into discovering electromagnetism; or compasses, the discovery of which attracted human animals —  sailors, traders and conquerors — to new shores?  What about attractions between what we (mistakenly) call the “lower animals” themselves, be they sexual or symbiotic like the rhino and the tick bird. Taken with this challenge, the following is the Official Hicks with Sticks Animal Instinct playlist with links.  Audio and the video versions linked to here often differ.

01. Fish License – Monty Python
This video presents one version of this sketch, the audio version is different.  Both are rich in fauna including halibut, prawns, clams, pike, haddock, dogs, cats, fruit bats, and bees; the audio version is mainly what happens between 0:46 to 4:07 and ends with the closing line, “Then I shall have to ask you to listen to this,” which leads nicely into…

02. Poisoning Pigeons in the Park – Tom Lerher
… unlike this video version, the audio version is fully orchestrated which enhances the satire of human attitudes toward the “lower animals.”

03. Chicken and the Hawk – Big Joe Turner
This old school swingin’ tune describes a Romeo and Juliet-type affair between two birds of a different feather.

04.Amoeba Hop – Christine Lavin
The CD version is much perkier than the live video version, but hey, single-celled animals need representation too.

05. Insect Ball – Big Jay McNeely
Moving a tad higher in the evolutionary scale, here’s a slice of life at an insect party.  “The bedbug couldn’t come.  He had to work that night.”  The YT video, amped up and recorded around, more than with, Big Jay McNeeley, lacks the pizzazz of the original recording, but it’s all YT has. 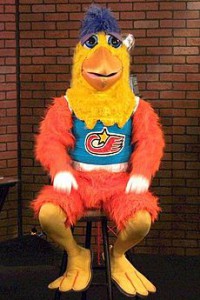 06. Do You Think I’m Sexy – The KGB Chicken
This isn’t about animals, it’s by them.  Rod Stewart’s original is a disco piece o’crap, hence perfect for reworking by an a-capella chorus of chickens.  Some may remember the KGB Chicken as a San Diego Padres mascot of yore.

07. Run Red, Run – Weekend Warriors
The video of The Coasters original version tells the story of a poker playing, gun toting monkey who gets the drop on a card-cheat.  The Weekend Warriors’ version, unavailable on YT, really takes it up a level.

08. Cattle Call – Riders in the Sky
Their YT version doesn’t quite fall off the tracks as much as the audio version, which ends in chaos with circus monkeys throwing ducks at cowboys.

09. Little Pig – Polecats
These ’80s rockabilly cats sing about a wolf wanting to romance a little pig (here used in the most complimentary sense).

10 Hillbilly Wolfman – Sonny George
In this live take, Sonny George (ex-Planet Rockers) gets the entire audience howling at the moon.

12 She Is the Mammal – Fish Karma
This is the ultimate animal magnetism song, though you’ll need a grounding in 10th grade biology to appreciate it.