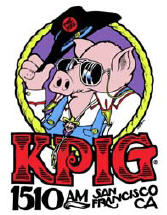 KPIG is leaving its San Francisco post at 1510 AM.  In an Internet-published farewell, KPIG’s marketing main-man, Ed Monroe wrote, “…we came up short on 1510AM in SF, but it wasn’t for a lack of trying.”

Ed, (facepalm) you guys didn’t try much.  Advertising?  Advertisers?  KPIG-SF promotions?  SF events?  Marin/EB outreach?  General schmoozing?   The station produced Tim Lynch‘s one lonely Saturday SF radio show.  Lynch backed Bay Area bands to the hilt, and thanks for that, but his job was programming, not marketing.  Oh well, it might have been a losing battle from the start since local radio is a fairly dead concept among the Digital Generation.

Corporate radio cooked its own goose in the ’90s by dumbing itself into insignificance.  iPod technology drove in a few nails as did XM radio, the Internet, and services like Pandora that build personalized play-lists based on each listener’s clicks of  “like.”  KPIG was one of very few that survived the Great Radio Quality Purge due to a millionaire multi-station owner who happens to be a KPIG fan.  (Another “thanks” for that.)

But by the turn of the century, broadcast radio as an entertainment option had become an afterthought among youth married to programming its own.  The Pig’s homey, self-programming DJs couldn’t compete in a market where people think in terms of  hearing what they want when they want to hear it.  The plug gets pulled Sunday, August 15th.