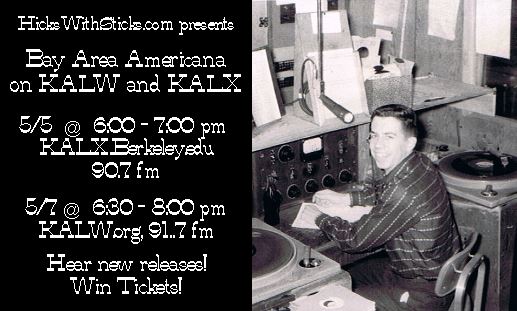 Hicks with Sticks presents Bay Area Americana May 5th on KALX and May 7th KALW.  New releases from Jinx Jones, The Vivants, The Earl Brothers, Buck Nichols, The Easy Leaves, Flash Crash & Thunder, JonEmory, One Grass Two Grass, Jesse Daniel, The Alabama Bow Ties, Jim Kweskin and Merideth Axelrod, Tommy Thomsen, The Nickle Slots and Bum Wagler will figure into one or both shows, with more to come as the tune roundup continues.

José Segue will be a guest on DJ Meaty Paws‘ KALX show from 6-7 pm on Thursday 5/5, and will host Peter Thompson‘s “Bluegrass Signal” on KALW from 6:30-8:00 on Saturday 5/7.  There’ll be ticket giveaways as well.  So far there are tickets to The Sadies on June 8th at the Great American Music Hall, and John Doe and his Rock & Roll Band on June 26, also at GMAH, with more tickets to be announced.

Both show will be broadcast over the Internet via KLAX.Berkeley.edu and KALW.org, or via the good old fashioned radio on KALX at 90.7 FM and one tick up the dial on KALW at 91.7 FM.