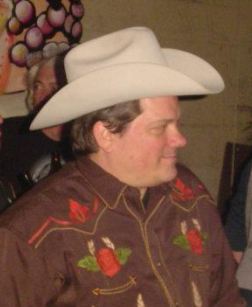 The Christopher Ford Band played blues for 16 years when, in 2010, he returned to his ’70s listening roots that included Gram Parsons, Eagles and Merle Haggard and took the plunge into country.  He hooked up with Hammerin’ Hank Maninger, the go-to guitarist for any number of bands past (Hacienda Brothers) and present (The Better Haves), and together they laid the foundation for many of Ford’s projects.  Maninger has recently left to join the very busy Stompy Jones retro-swing band, but that won’t slow Ford’s twang wagon.

Christopher Ford Band 2.0 plays a mix of blues and country standards at the Saloon in North Beach, 4-8pm, every first and third Thursday.  Be prepared for some of his musical pals to play or sing (and for the Saloon’s strong, cheap drinks).  It’s also likely that Quarterman Jack, his radio alter-ego, will have an increased presence as this band draws closer to recording.  The Christopher Ford Band has, after all, put 16 years into being a blues band, and Quarterman Jack is better known to the Bay Area’s twang community.

Quarterman Jack Champion is the mainstay of his radio show at Radio Valencia, a station webcasting from SF.  His “Bakersfield Backbeat” features old school C/W from 2-4pm every Saturday.   On special Saturdays, “Bakersfield Backbeat” becomes a live radio variety show that showcases Bay Area bands, off-beat acts like the Bad Mommies or B-Stars Eric Reedy and Greg Yanito swapping groan-worthy jokes, and of course MC Champion Jack himself, at times wearing something goofy like a halo, angel wings and a diaper.  This is a great show to attend — early, free and fun.  The Bad Mommies say, “Check the Hicks with Sticks calendar and bring the kiddies!”

The live show, which can bring 15-25 people to the stage over the course of two hours, is also a feat to organize, but he gets by with a little help from is friends including Les James (Red Meat) who has offered the Riptide for Chris Ford’s “Hillbilly Hootenanny Westside Revue” every first Sunday of the month.  This show is part open mic and part invitational, and can serve as a rehearsal of sorts for the live “Bakersfield Backbeat” radio show.

One might think that the radio show, Saloon, Riptide and other bookings would keep him busy, but he’s also planning a house-concert-type acoustic show and a TV show that can air from Radio Valencia.  The blues’ loss has been twang’s gain since, by putting more in than he takes out, Christopher Ford has given Bay Area twang a welcome boost.  Find him on Facebook or on his own site; and for something different check out this video of him, backed by The Better Haves, singing Depeche Mode‘s “Your Own Personal Jesus.”  Classic.