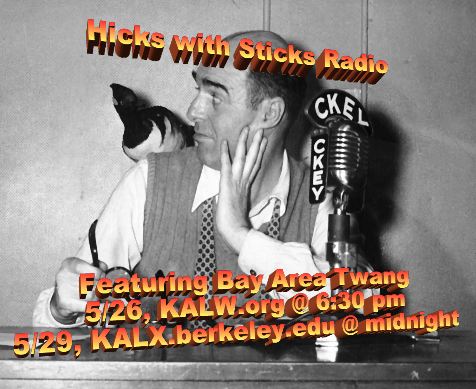 Hicks with Sticks will showcase local twang over KALX and KALW on May 26th and 29th.  Bay Area honky-tonk, western swing, insurgent country and rockabilly all figure into the mix featuring new releases and pre-releases from the B-Stars, Brothers Comatose and West Coast Ramblers; 2011-12 music from musicians like Tom Armstrong, Evie Laden Band and Kit and the Branded Men; and gems like Big Lou’s 21st century update on “Smoke, Smoke, Smoke that Cigarette” called “Talk, Talk, Talking on the Phone.”

Jose Segue will be on-air with hosts Peter Thompson over KALW 91.7 on Saturday at 6:30, and Meaty Paws over KALX 90.7 at midnight on Thursday.