The Back Room in Berkeley kicked off in mid-April with Laurie Lewis and Friends, and a mission to recreate the intimacy of the old 75-seat Freight & Salvage which itself has moved on to bigger and better things.  The Back Room, like the Freight, hosts a range of acoustic styles including the high and lonesome sounds of Wendy Burch Steel and Redwood on 9/10 and western swingers Don Burnham and the Bolos on 10/7. 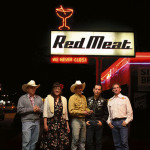 new F & S has ambiance, good sight-lines, better lighting, great sound and, best of all, modern plumbing, but as seating capacity goes up, intimacy goes down.  Yet between Red Meat/77 el Deora on Friday, August 19th; then Laurie Lewis/Mary Flower/Suzy Thompson with their “heirloom music from three wise women” on the 21st; then Bill Kirchen and Austin De Lone with hall-of-famer Bobby Black sitting in on steel guitar on the 27th, there are at least three solid reasons to get to the Freight this month.

House concerts open another world of acoustic music in the East Bay.  Wisteria Ways presents a cross-section of musicians rarely heard in clubs or cafes.  Popular Playhouse does much the same thing, mainly in Berkeley.  House concerts provide great social networking opportunities with real live people who share musical tastes.  In a club we tend to socialize with whoever we came with, but everybody talks to everybody at house concerts. Meetup.com knows this and offers a group, based in the East Bay, that’s dedicated to the house concert experience.

There’s one other venue, a former laundromat in Berkeley, that has been converted into a truly wonderful music space and been booking amazing acts for years, but that’s all Hicks with Sticks can tell you about it.  They’re ultra hush-hush.  They have no sign and even if you do find the place, you’ve got to know somebody who knows somebody before they’ll let you in.  But, by getting familiar with the East Bay house concert scene, you will eventually get to know somebody who knows somebody and you can find out if they’re the right somebody by saying, “There’s supposed to be a low profile music venue in Berkeley, but there are strings attached to getting in.”  The right somebody will know immediately what you’re talking about.  (And this concludes the Pokemon Go portion of this post.)