Port Costa, a nook of a town, rests just east of Crockett on the south bank of the Carquinez Strait and is home to 190 souls according to the 2010 census.  It’s also home to The Warehouse, a cavernous restaurant and bar that once functioned as a riverside freight depot.  Sanford & Son are its interior decorators.  The Burlington Hotel across the street used to be a brothel.  It’s rooms don’t have numbers instead they have women’s names.

The town’s Mayor, the Honorable Mitch Polzak of Royal Deuces fame, has chaired the town’s New Year’s Eve proceedings for three years running.  This year’s Aldermen-at-Large were Les James on drums, Billy Wilson on bass, plus a couple of guest local players along with Pam Brandon and Serena Polzak, the Mayor’s 12-year-old fiddle-playing niece. 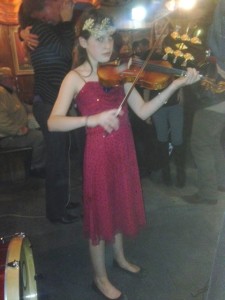 This was New Year’s Eve the way it should be with good company in a relaxed atmosphere and weather cold enough to freeze the puddles in the parking lot’s potholes.